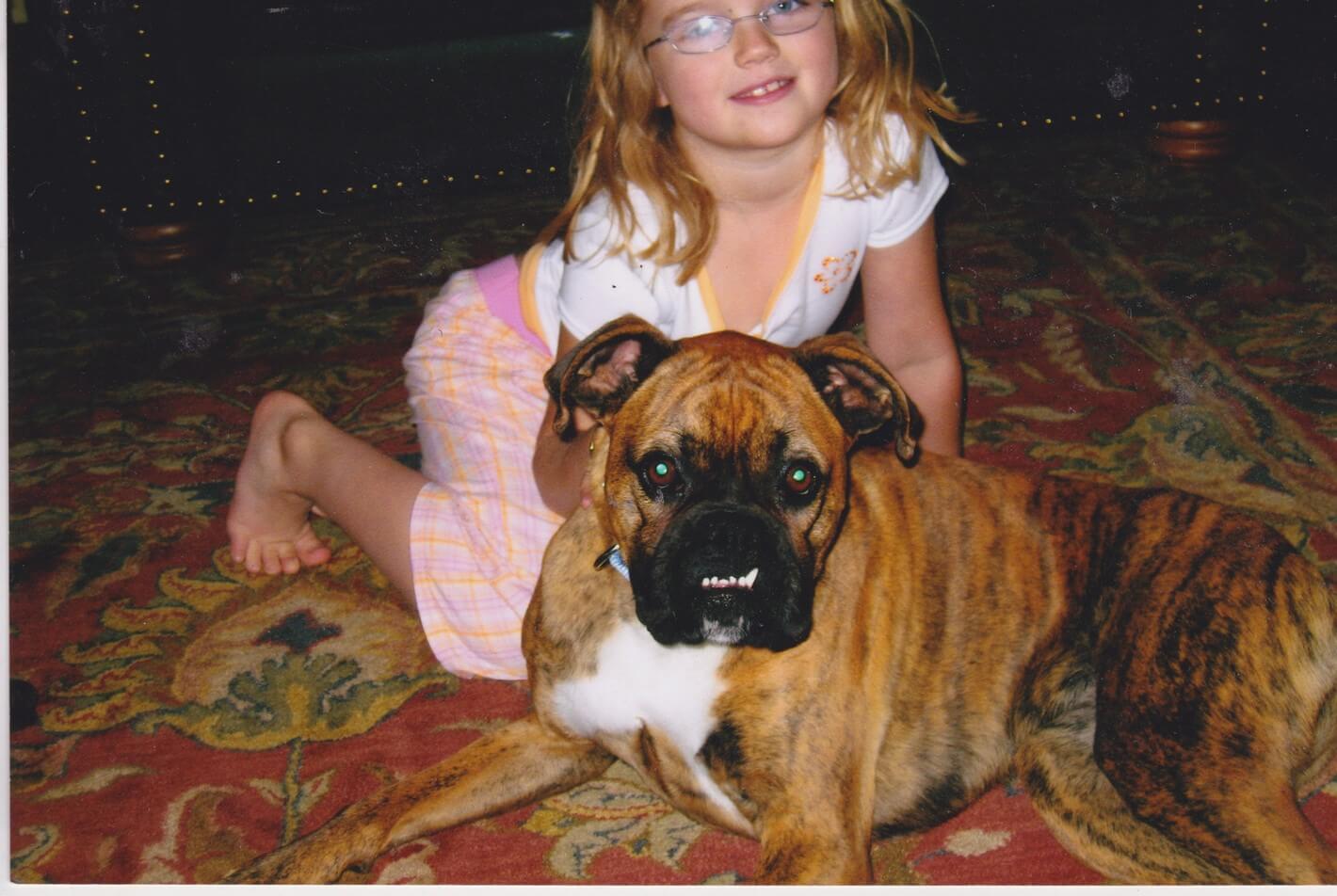 “I just think you’re distracted,” Scott, the Dog Trainer, kindly pointed out.  I had failed to work with our uber intelligent Boxer puppy in advance of our training appointment once again.  “It would only take a minimal amount of work and Tango could be competing in….” (the rest of the sentence made no sense to this City Girl).  We had fancy “AKC” papers (whatever that means) that were supposed to be officially “filed” someplace, for some important reason that eluded me.  All I knew was that after letting the puppy outdoors for more than 20 minutes every 2 hours, the first thing she did was waddle over to my favorite new beautiful rug, squat while gazing directly at me, and potty. “FOR THE LOVE OF GOD!  I FEEL LIKE I JUST BROUGHT TWINS HOME!,” I would scream in exasperation.  My seven-year-old daughter had to take over the role of “Handler” (what the HELL is a handler, anyway?). 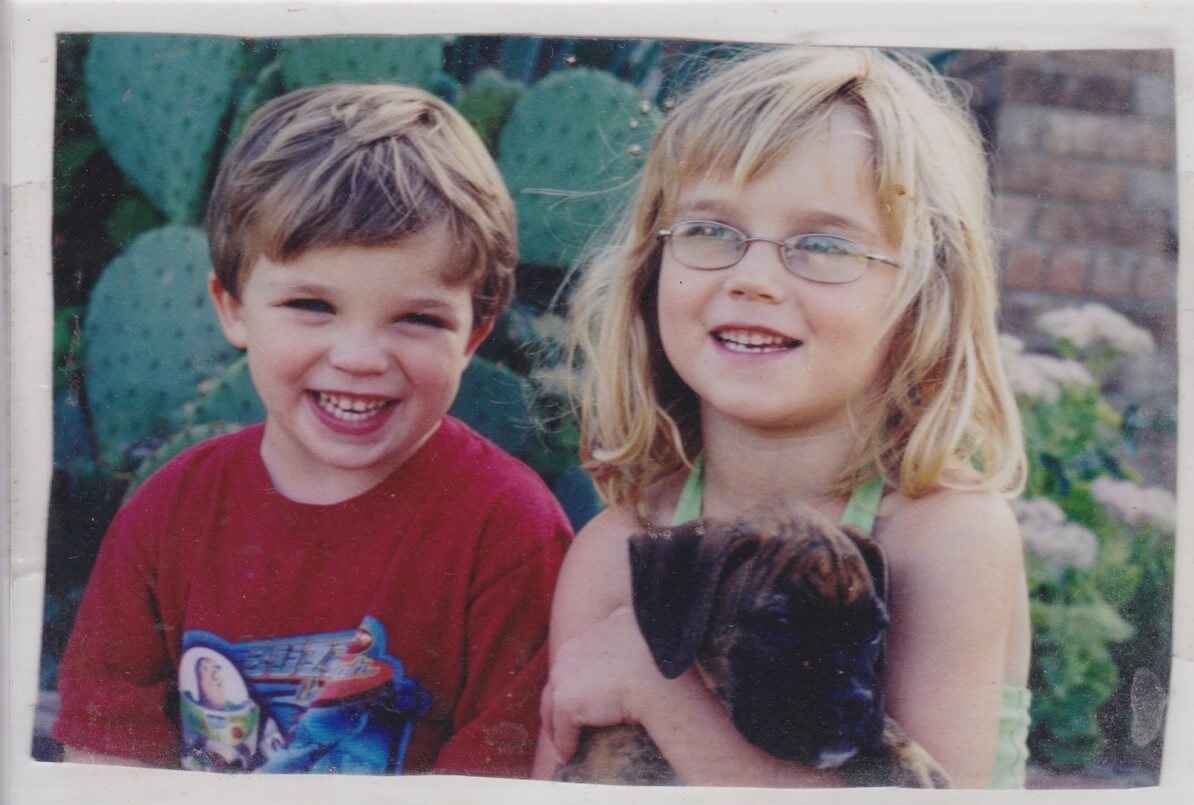 Oh, how the kids loved “Tango,” a name that was, in the early days, in competition with “Tiara.”  The final name decision came down to 2 main factors:  1) We had named our 34-acre piece of Kansas paradise “Tango Canyon” to honor my husband’s Argentinian heritage; 2) It brought joy to my husband and me that the neighbors, with whom we were feuding legally, had to hear us yelling “Tango” several times a day.

And, just like the enchanting and wondrous dance from Latin America, our Tango was complicated (because she was smarter than me), challenging (because we had no fence in Paradise/Tango Canyon), and charming (the Country Club Superintendent knew her personally from all the times she ran away and the Rancher across the street could never catch her fast enough to return her home, away from his cattle).  Tango became a kind of precocious Peter Rabbit in our parts and I was the tired and overwhelmed Momma Rabbit, constantly in search of her infinitely curious Peter.

The escapades involving the chasing of Tango and her valiant return home are too numerous to recount here, so since it is Memorial Day, I will recount only one.  I mentioned Ranch across the way from our land but directly across from where we lived was a beautiful cemetery called Highlands.  It overlooked the whole town of Winfield, Kansas as well as the Walnut River.  Memorial weekend was our favorite time to live across from Highlands because of the constant flow of townsfolk who would bestow their loved ones’ graves with silk flowers that later blew away in the fierce prairie wind – and my kids would gather like treasures in the wagon and lovingly present to me!  There was also a beautiful and somber Ceremony of Remembrance that the local Armory sponsored among the hundreds of flags placed throughout the cemetery by the local Rotary club.

Around 10 am each Memorial weekend Saturday morning, we would hear the patriotic trumpet music from Highlands and up the driveway we’d ramble to watch.  I guess one Saturday, when Tango was about 2, we forgot.  Or the kids were in the basement and the noise from the tv overpowered the patriotic trumpet music.  So we forgot to go, but Tango didn’t.  Off she trotted by herself (she was quite accustomed to this), to enjoy the lovely service in honor of the American fallen heroes.  When the ceremony concluded and everyone had gone home except Tango and Sergeant Pfeffer of the local National Guard, the 2 left together in his truck and returned to the Armory about 3 miles away in town.  There, Tango spent a wonderful weekend with Sergeant Pfeffer as the newly appointed “Armory Mascot.”  Sadly, I probably did not even notice that Tango was missing until late in the day on Saturday.  The kids became aware of it and set out to find her, calling “Tango” all over our land until dusk.  When she did not reappear, as usual, we became concerned and decided to call Dr. Warren, the local vet who knew just about every pet in town and was the unordained “lost dog network” figurehead.  He had not heard anything, but promised to keep us informed.  We slept better that night knowing our good friend, Dr. Warren, had his ear to the ground in search of the missing Tango.

The following day, our home phone rang a few times with the id “National Guard,” so I did not pick it up, assuming it was some kind of fundraising call preying on the emotions of patriotic Americans during Memorial weekend.  The same thing happened on Monday.  Oddly enough, Tango had not reappeared, either.  Our lines of search and rescue were going cold, but the calls from the “National Guard” persisted.  I never put it together that there could be a connection between our missing Tango and these annoying calls.  My seven-year-old, Isa, had to point it out.  “Mom, call them back!” she urged.  So I did.  On the other end of the line was a very pleasant and kind voice, Sergeant Pfeffer.  “Hi, this is Joan Tamburini, I have received many calls from this number,” I began in my irritated big-city tone.  “Oh, great! I think we have your dog,” Sergeant Pfeffer proudly announced.  He then told me the story of how Tango had wandered up to his group during the annual Remembrance Ceremony and how she had lingered by him when the rest of the crowd disbursed.  “She just happily climbed right into my truck,” he amusedly recounted.  “So she’s been here with me all weekend, keeping an eye on things and enjoying the Armory.” Oh. My. God.  Instant embarrassment and apologies from my fast-talking city mouth.  And my Isa stood before me, hand on her hip and lips pursed, judging my incompetence.

Retrieving our Tango from the Armory and meeting the delightful Sergeant Pfeffer gave our family something to do that boring Memorial Day in 2007.  When we arrived, Tango greeted us personally and gave us a tour.  She would have been the perfect Armory mascot.  But we brought her home.  And the adventures continued…….