What do property lines, cemeteries and Memorial Day have in common?  A short poem by me might help illuminate:

But the neighbors six feet under

I am a taphophile.  The Urban Dictionary defines taphophilia as “a love of funerals, graves and cemeteries.”  So it is no surprise  that living across from one of the most beautifully maintained, serenely perched cemeteries for 6 years brought me immense joy.  Especially since my front door faced East and the light reflecting from the many headstones at sunset cast a brilliant bronze and pink aura across a rolling lawn of native Kansas prairie grass each and every evening.  Sigh.  The sunsets and that special reflecting light from the headstones in the cemetery got into my soul.  And the nagging neighbors did everything in their power to kill my swag (as I have overheard my kids say).

Just West of our beautiful bucolic home and surrounding acreage things were far less pleasant.  The neighbors wanted justice by any means and their leader was “The Gray Man,” innocently dubbed so by my seven-year-old daughter who often witnessed him patrolling our pastoral route in front of our home she named “the twisty road.”  Long before our family arrived in this Land of Wonders called Kansas, a Homeowner’s Association had established covenants about the use of its subdivision land.  Conflict arose over differing opinions when what we believed to be our back yard was, in their opinion, the neighborhood park.  Fighting over a tiny parcel of land that had originally belonged to Osage Indians made life with young children in a small community entertaining for locals and tedious for our household.  But the neighbors could never rob me of my nightly sunsets and fantastic strolls through Highland Cemetery.

In 2009, our battles with “The Gray Man” and his posse were in their 5th year and, quite frankly, becoming most redundant for me.  I sought solace in the beauty of the cemetery and it was there that I discovered a most wondrous treasure:  the headstones of our newly inaugurated 44th President of the United States, Barack Obama’s great-grandparents, Rolla and Leona Payne.  Ha!  Rememberef as fine, hard-working Midwesterners by neighbors, the Paynes retired to Winfield in 1956 until their death and burial across the street from my future home in 1968.  To me, this ironic fact reduced all the petty bickering with the neighbors to the West to mere folly.  Like the Paynes, my family were outsiders seeking nothing more than the same peace and serenity from a land that never really rightfully belonged to anyone except Native Americans.  Covenants be damned! 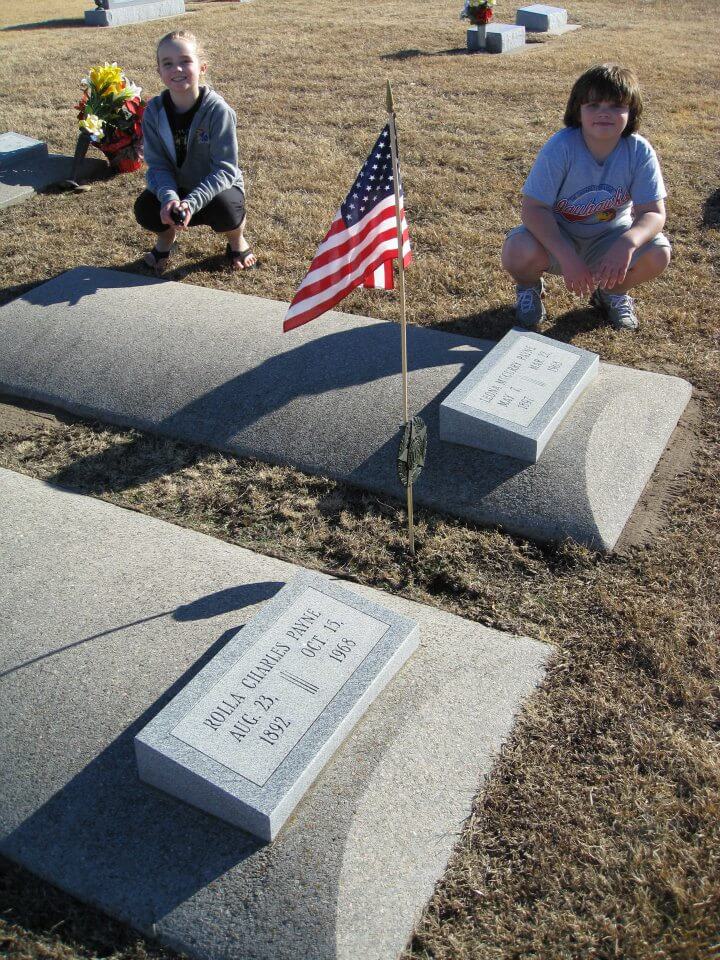 Each Memorial weekend hundreds of families visited the beautiful cemetery on the twisty road that was once a haven of peace for mea and a treasure trove of silk flowers, blown by the fierce Kansas winds from their proper places, retrieved by my children and gifted to me to grace our dining room table.  The table which overlooked our beloved neighbors to the East.

3 thoughts on “The Neighbors to the East”