I LOVE BEING A MOM.  I especially love days when JUST being a Mom gets to be my main focus.  Today was one of those days.  It was great!

Though 17 and 15, my daughter and son still need their Momma for support, advice, caring, guidance and help shaping their world views.  (They need Dad, too, for all the same things.  We do it differently, of course!).  It is late May and they are weary from a long school year.  My daughter is a little teary as the pressure of her impending Senior year mounts:  ACT prep; Drill Team camps, practice, leadership; saying goodbye to friends who will be leaving for college; making plans for her departure from the nest; bonding with her friends through each of the “lasts” of 12th grade.  Yesterday, I left a pair of socks with the word “relaxed” in her room for her – an “I love you” just from me for her sweet dancer’s feet. My son, who is very much a free spirit and his own person, drudged through his 9th grade year – it has been a long year for him and he his looking forward to summer and a possible career as a life guard!  A week ago, he referred to each remaining day of the school year as “7 hours of soul-crushing disappointment.”  This morning, as it poured rain in Kansas City, and I had the entire day off to myself, I received this text from my son:  “If you get me I’ll give you a foot rub and 3 quarters.”  So I did!  We went to lunch and had a wonderful time. I may not always get things “right” as a Mom.  But I try and I definitely enjoy the experience.  My children know I love them and they will always be FIRST in my world.  I have been fortunate to be able to spend alot of time at home with them.  And, like many other Mothers have said before, I can honestly say that I have found things to LOVE and enjoy about every stage of their young lives.  Somehow, it always works out that the stage we happen to be in together feels like my “favorite” stage until it changes again and the new stage becomes my favorite. 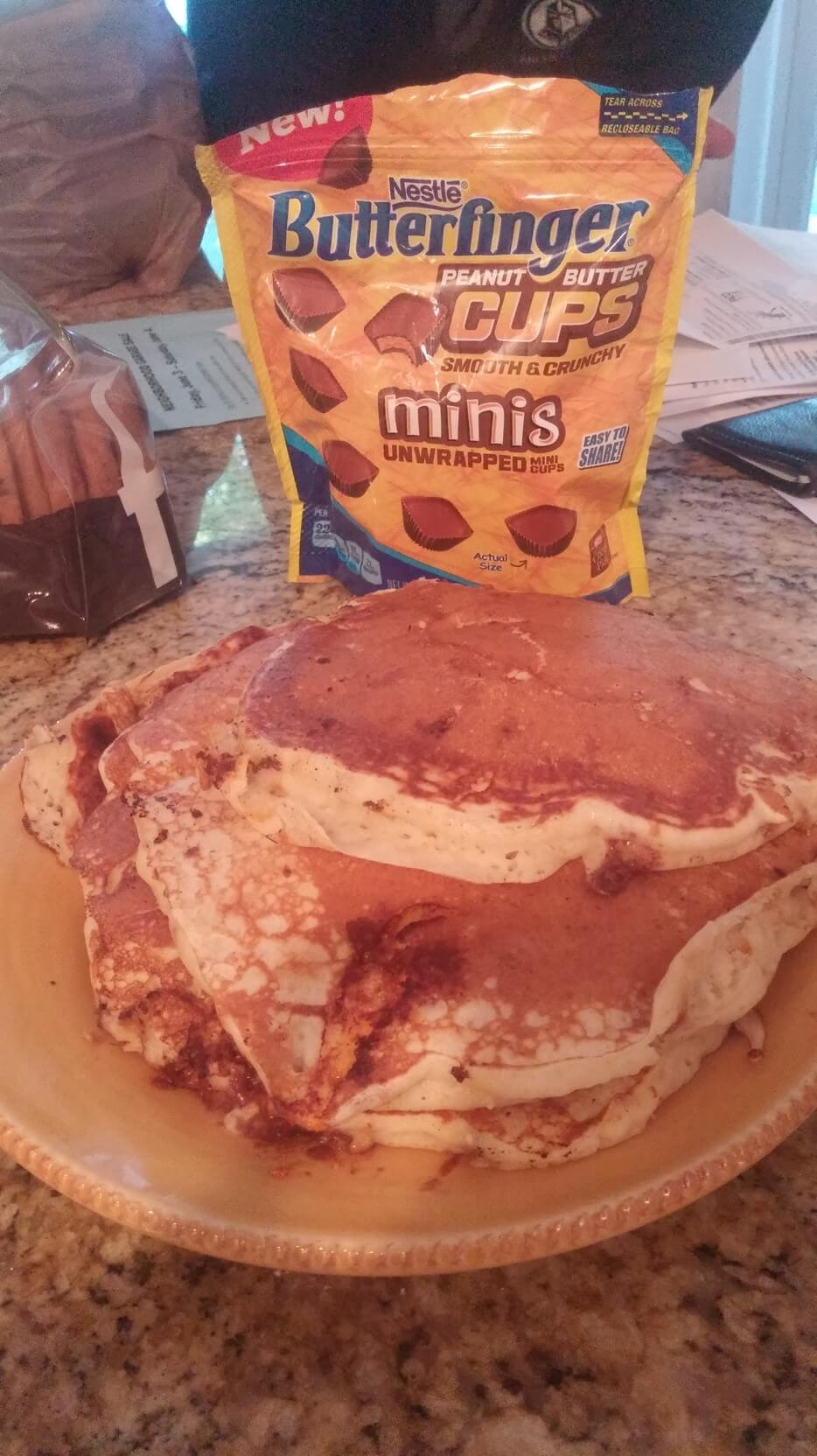 I made peanut butter cup pancakes for dinner – it sounded good to my son and will be comforting to my daughter when she comes home a little melancholy after attending her boyfriend’s graduation.  I love being a Mom.  I love living in the moment. What a beautiful blessing it is to have the privilege of bring another human being into the world and preparing them for their journey.

Find out more about Adventure Mom and how you can contact her with adventure ideas or business partnerships. I was 8 when my mother was 50, and sometimes, standing among the young moms in the schoolyard, she said she felt like our grandmother. For Cal, as everyone called her, had married late.

They may not have had much money, but they sure had fun, to hear the tales: of evening dress at the Ritz and raccoon coats at the Harvard games. And yes, there were men on these occasions: young singles and the brothers of friends. “But to be honest,” she said of them all, “there was no yeast in the bread” – by which she meant they didn’t attract her.

Then she met our father, stationed… These days, I find myself dripping in happiness.  After months of working hard to train my mind to stop being afraid of living, there is now an abundance of joy in my life – more than enough to share without fear of running out.  I think I found happiness because I intentionally set out not to find happiness but purpose.  We ALL want to be happy, sure.  For many, the definition can include many things/pursuits/achievements that bring happiness to one’s life, which, as we all know, can be fleeting.

I tend to oversimplify but that’s the way I get to the core of challenges so here is what I am trying to say:  I found happiness accidentally by searching for purpose on purpose.  And the sweetest discovery is this:  happiness is the sum of the good thoughts, deeds and people you surround yourself with.  It is HORIZONTAL, not vertical, as our culture portrays.  Further, one is more likely to experience joy and happiness in moments of absolute stillness….absent struggle, thinking, working, climbing, scheming, toiling, or anything of the like.  Brilliant!

What has amazed me in this magnificent experience is that my purpose is revealed to me when I am re-energizing my soul, daydreaming, napping, walking, baking, or doing any number of things that are not centrally focused on intensely pursuing happiness.  It found ME, not the other way around! Here are 9 general beliefs/practices I have adopted that I believe are positively contributing to my experiencing a life of maximum purpose, satisfaction and happiness:

So, my friends, I share the greatest discovery of my recent months with you today:  Happiness is Horizontal

You are much more likely to experience it in a state of relaxed acceptance of the present moment!  Enjoy and Namaste. Today, I am home with my teenagers who have been throwing up.  This causes me to fondly reflect upon previous such “special family times,” one which especially stands out in my memory from Spring 2007, the day my kids had to stay home and take care of their parents because they were both throwing up!  My Isa, 7 years old at the time, divided her time that day between devotedly bringing her Dad and me our favorite popsicles then dancing outside in front of the house.  This beautiful memory has led me to reflect upon the entire history of our family and my approach to parenting.  I love being a Mom.  In fact, it is all I have ever wanted to be.  I used to ride my bicycle up and down my driveway as a little girl playing “carpool.”  What I wouldn’t give to have a recording of those imaginary conversations!

Since my daughter is just a year away from graduating from High School, her Senior year of “lasts” looms largely in my mind.  Anticipating each last.  Hoping I will savor and enjoy them to their maximum.  One of the images that I have discovered in my meditation practice this past year (as a recovering alcoholic with 10 months of sobriety) is a moving stream:  if I feel emotionally depleted, I imagine myself dipping a beautiful vessel into a cool, clear stream and nourishing myself with Nature’s goodness.  This type of imagery not only helps me sustain myself without relying on numbing substances, it is also a great way for me to re-frame the present moment.  Instead of dreading new beginnings or fearing endings, I think of life and love as a continuous stream, a continuum that has no beginning or end.  There for me to enjoy, participate in and freely use to sustain those around me (especially my teenagers).  I am going to try to continue thinking about my daughter’s Senior year as a beautiful transition that is part of the stream.

Yet, my thoughts did manage to navigate toward a gnawing, very human question:  if I had it to do over, would I change anything about the way I parented my young children?  I have only five “regrets,” (a word I try to use sparingly, since it is dangerously close to resentment, which a recovering alcoholic cannot afford).  Surprisingly, nothing on my “List of Five” has anything to do with taking away bad things – rather, it is more about wishing I had done MORE of the good things: So far, this journey of parenting two individuals with different temperaments, needs, likes, dislikes and aptitudes has been so beautiful.  Looking back, I would like to have been able to relax more and enjoy the small moments.  Looking forward, I am grateful to be living a healthy, clean and sober life, so the future with these incredible people God shared with me will be as vibrant as I feel. Source: Eff You, Heart (aka Detaching with Love)

Always a great reminder, especially in recovery:  you can still wish a loved one the best and take care of yourself.

I want to encourage the breaking of silence, the smashing of stigmas, and foster building blocks of understanding. #MHA

So happy to share this on the blog today! Truth: it has been far easier for me to find support for alcoholism than treatment-resistant major depressive disorder and anxiety.  There is still so much fear, ignorance, judgment and stigma around depression.  I am thankful to those courageous enough to break the silence and go deeper than just “I’m fine.” This past Sunday, I logged into AA Grapevine and entered my Sobriety Date to check the number of days I have been sober.  It’s just way of measuring success, I guess, like weighing oneself on a scale to stay motivated during a diet.  I am an alcoholic, so my “diet” will never end.  I have been sober for 7.7 Months.  If I did not have the “Sobriety Calculator” or any other means of measuring the number of days I have been sober, I, the Stubborn Doubter, have lots of empirical evidence that each hour sober is 100 times better than any vino fino tinto.  Here is my list of 5 Gifts of Living Sober:

“The toughest part was realizing that recovery would never be “over” – not if I was going to take it seriously.  When you’re a part of my club, taking out a lease on recovery is not an option.  When I really thought about the lack of alcohol forevermore, it felt like I’d been told to clean the Grand Canyon with a toothbrush, while blindfolded.  But every once in awhile, tiny moments of peace and joy descended upon me and were so defined and real, they lifted me out of my canyon.  I would focus on the higher horizon then, and just kept walking.

I saved the best gift for last:  Living a Sober Life means spending your time the way you want to, free from the chains of an addiction that leads to darkness.  There is so much LIGHT in my life because of the new freedom I have discovered that it is okay to feel and express emotions and spend a day doing as I please instead of constantly weighing and measuring myself against impossible standards.  Reading poetry has always been one of my favorite hobbies, but I gave it up to lead a more “serious” life of career and family.  Now it is back in my life and I feel rejuvenated.  Here is a new favorite poet and her artful examination of leading one’s own life:

Poetry
By
Mary Oliver
The Journey

One day you finally knew
what you had to do, and began,
though the voices around you
kept shouting
their bad advice–
though the whole house
began to tremble
and you felt the old tug
at your ankles.
“Mend my life!”
each voice cried.
But you didn’t stop.
You knew what you had to do,
though the wind pried
with its stiff fingers
at the very foundations,
though their melancholy
was terrible.
It was already late
enough, and a wild night,
and the road full of fallen
branches and stones.
But little by little,
as you left their voices behind,
the stars began to burn
through the sheets of clouds,
and there was a new voice
which you slowly
recognized as your own,
that kept you company
as you strode deeper and deeper
into the world,
determined to do
the only thing you could do–
determined to save
the only life you could save.